Afrodubist duo Cousin Silas & the Glove of Bones return with a fairly seismic shift in sound on NEW RUNES. Featuring numerous additional guests this one is a challenging listen but seems to have got some good traction.

For the artist notes.

“Looking at the files for this album, the first sketches appeared around September 2021. That makes it the longest gestation for a collaboration album with Cousin Silas (our sixth, the last in 2020). It’s also the greatest gap in putting out any new ideas since the GoB began.
In the past I’ve started out with a broadly clear narrative to work around. This didn’t start that way. I just had a circling nucleus of undirected rage that occasionally proposed titles and ideas.

The period from March 2020 to September 2021 delivered so much ‘content’ both over the internets and IRL. It was difficult to filter this down to reason. There’s an interview with David Bowie by Jeremy Paxman from 1999 where DB prophesises the impacts both positive & negative of the internet. Look it up (it’s worth noting that the planet has gone to hell since he passed. Studies need to be made).

It was perhaps not surprising that a global pandemic delivered the best of humanity on so many levels (charity, reason, science, benevolence, realisation of the value of workers, a tantalising look at how life could be better valued and lived) and also finally unboxed the absolute worst that had for numerous past decades been side-lined by truth & reason.

Puritanism, righteousness, division, corruption, an imagined ‘culture war’, embedded & extended privilege, a riled & enraged but ill-informed and manipulated electorate, an unimaginably wealthy tiny number of people, all took a deep breath and realised shouting at the marginalised, using punching down rhetoric and waving flags works and might delay their ultimate & deserved extinction.

Welcome to the New Dark Ages (yes, Pere Ubu got there first but I stand on the shoulders of these giants).

Dedicated to the ‘woke’, the SJWs, the non-conformists, the transgressives, the punks, the anarchists, XTR, the lefties & liberals. Every time these terms are used as slurs it means you’re winning.


New Runes is an arthritic index finger raised and ready.

Thank you to those who contributed to this auditory rant.”

2: The Universal Hum 3:30am
This track includes a section of dialogue by Anton La Vey and a short section from his musical works.

3: I laughed at the Great God Pan
Cousin Silas: Guitars & synths
Title from a short story by Jack ‘King’ Kirby.

8: The War on Saturnalia
Cousin Silas: Guitar and synths

Three cassette variations are available with a few still on the BC site. The shiny ones are very pretty and very rare. 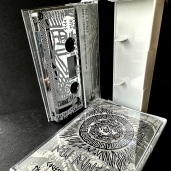 Also included are a set of postcards showing the original Lino cut images for each track.